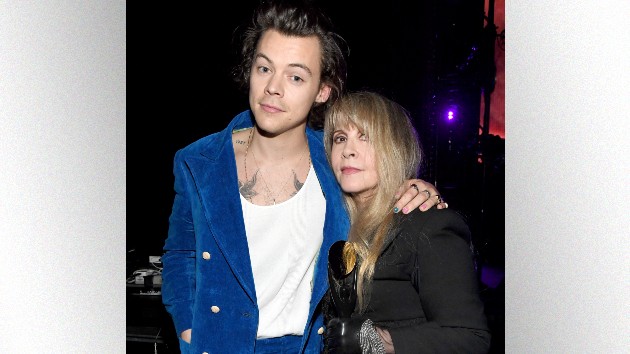 Long before Harry Styles became the solo superstar he is now, he and rock legend Stevie Nicks developed a special friendship. Now, Stevie says they’re so close that she feels they have some kind of cosmic connection.

Speaking to Zane Lowe on Apple Music 1, Stevie says of Harry, “He that kind of friend. He’s a brother, and a son, and maybe we’re best, best friends in another life or something. I don’t know. But yes, we’re very close.”

Their relationship started in 2015, when Harry went to see Stevie in concert and brought her a special cake. They’ve since joined each other onstage several times, and Harry has Stevie listen to his music in advance to get her opinion. In 2019, he inducted her into the Rock and Roll Hall of Fame.

Stevie recently returned to the stage after three years, which, she says, she spent “at home watching miniseries and not leaving the house hardly ever and being in a small bubble.”  She was bound and determined not to get COVID and she tells Zane that she still hasn’t.

“I’m not getting it. That’s my mantra,” she insists. “And I said, ‘Well, I’m not having it because I’m not having the long haul after effects of it.’ I barely made it to 74 years old. I am not going to drop dead of a stroke in two years because I got COVID. So that’s why, out here, we are being so careful.”

Stevie next plays the Ohana Festival in California on September 30; she has dates scheduled through the end of October. She recently released a new single: her version of Buffalo Springfield’s 1966 classic “For What It’s Worth.”